Ah, the weather, the single most used topic for opening a conversation in the history of mankind . . . but what about the weather in Grand Canyon National Park. Is it likely to rain? Do you need to take a sun hat and glasses? How prepared must you be for changes in the weather in the Grand Canyon? Let’s see . . . 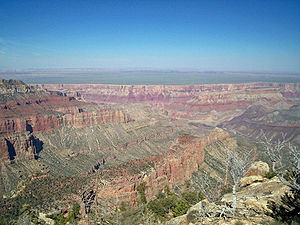 The weather varies a bit between the South rim and the North rim, and varies a lot depending on whether you are on the rim or within the canyon itself. The South rim generally has pleasant temperatures in the summer time, 50 – 80 degrees F, or 10 to upper 20’s degrees C, but these temperatures can become extremely hot within the canyon itself (think of it like walking into a huge oven). 5000 feet below the rim can see temperatures in excess of 38 degrees C, and that’s HOT. It doesn’t get quite so hot on the North rim because of the elevation.

The South rim of the Grand Canyon can experience some pretty extreme weather conditions in the winter time. There’s often snow and icy roads which can lead to road closures. Temperatures plummet and, added to the wind chill factor can drop as low as 0 degrees F, that’s -18 C. It’s not even always possible to actually see the canyon in the winter time during heavy winter storms, but you won’t get your entrance fee back so don’t bother asking. It’s the chance you take when visiting the Grand Canyon National Park during the winter months. The North rim is actually closed during the winter.

Grand Canyon Weather – In The Spring and Fall

Okay, we’ve spoken about the extreme weather conditions possible in the Grand Canyon during the summer and the winter, and all that I can say about the weather in the spring and fall is – expect the unexpected. Be prepared for sudden changes in the weather during the spring and the fall – so in answer to the above questions – yep, take your sun hat, take your sunglasses, but don’t forget your waterproofs and a nice warm jacket, just in case.

Well, that’s given you lots more to think about hasn’t it?