Lassen Volcanic National Park is open year round, all day, every day, 24 hours a day, seven days a week, it never closes – get the picture? If only life were that simple, I mean, that park is open throughout the year, but access by road is severely limited during the winter. The park might be open but it don’t necessarily follow that you’ll be able to get there, or get around once you’ve reached the park.  You’re particularly advised to check out the road conditions of Lassen Volcanic National Park between October through June, that’s a pretty long winter. You’ll also find that some of the facilities only open their doors during the summer, but some are open for year round visitors.

This visitor centre is the only facility at Lassen Volcanic National Park which is open throughout the year. It is close to the southwest entrance of the park and offers lots of facilities including a cafe and gift shop, dining area, amphitheater, auditorium, book store. There are also both summer and winter ranger led programs available.

This Lassen Volcanic National Park visitor centre is open every day throughout the year, except for Thanksgiving (November 24) and Christmas Day (December 25). Opening hours are as follows: 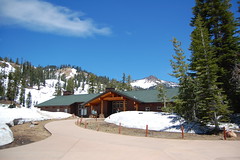 The Cafe and Gift Shop at the Kohm Yah-may-nee Visitor Center is open year round too (but not every day), with the following operating hours:

This museum is close to the northwest entrance of Lassen Volcanic National Park. It is open from 27 May through until the end of October, between 9am and 5pm.

Operating hours for the Manzanita Lake Camper Store – Summer only: