Mount Rainier National Park – Getting There . . .

They do say that all roads lead to Rome, but some will obviously get you there much quicker than others . . . the same goes for Mount Rainier National Park really, all roads can lead there but you’re obviously gonna’ want to know the most direct route.

Of course, directions change depending on your starting point, if I said “head to Seattle and turn left” then you’d have a fifty fifty chance of heading in the right direction, depending on whether you were headin’ to Seattle from the top (North) or from the bottom (South). That’s why I’m gonna’ include lots of detailed directions to Mount Rainier National Park, for people traveling in all directions . . . and hopefully you’ll be able to take it from there. If not, may I suggest that you invest in some type of Satellite Navigation system, but don’t believe everything they tell you, they have been known to lead people into some very tricky situations and in completely the wrong direction.

Mount Rainier National Park is in west-central Washington, and pretty close to several major cities – well, within a couple of hundred miles anyway, of – Seattle, Yakima and Takoma in Washington as well as Portland Oregon.

If you’re planning to drive to Mount Rainier National Park then it’s very important that you check out the road status before you set off . . . the dynamic nature of Mount Rainier can lead to unexpected road closures at all times of the year, so check it out before you pack your sandwiches, pile the kids into the back and fill up at the nearest gas station.

Mount Rainier National Park – Southwest – SR 706 provides year round access to the southwest corner of Mount Rainier National Park, the Nisqually entrance, and the road which runs from the entrance to Longmire is kept open throughout the winter months . . . most of the time . . . extreme weather could change things. The road which runs from Longmire to Paradise, however, is closed every night from 1 November and throughout the winter, re-opening in the mornings as long as the snow has been removed satisfactorily. Bear in mind that even if the road is open, some of the facilities may not be.

NB – GPS – I’ve already spoken briefly at Satellite Navigation systems sending you in the wrong direction, so be warned, the street address which you will probably find for Mount Rainier National Park (i.e. 55210 238th East Avenue) is actually the administration building at Ashford, Washington, and not the park itself. If you’re heading towards (or want to be heading towards) the Nisqually park entrance then you need to punch in “39000 State Route 706 E, Ashford, WA 98304” – see you there! 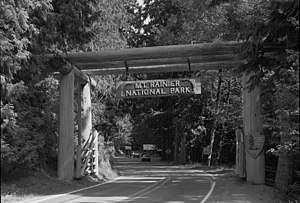 When you see this you know you’ve made it!

Mount Rainier National Park – Northwest – this route is open all year round too (weather permitting), the Carbon River via SR 165 which goes through Wilkeson, however, you are only permitted as far as the Ranger station in your vehicle, after that you’ve gotta’ ditch the wheels and continue on foot, or bicycle. There is another access point in Northwest Mount Rainier National Park at Mowich Lake, but this one is only open during the summer months and closes mid-October, or when the first snow fall arrives . . . whichever is first.
Mount Rainier National Park – Southeast – once again the roads to the Southeast of Mount Rainier National Park are open, unless they’re closed due to snow fall. From late May to around the beginning of November you’re usually okay to travel to Ohanapecosh on SR 123 via Highway 12 coming from Yakima or Packwood. Other access roads in this area may be closed, so once again I will say – CHECK THE ROAD STATUS BEFORE YOU SET OFF.
Mount Rainier National Park – Northeast – Sunrise as well as White River and the southbound SR 123 are all accessed from Enumclaw via the SR 410. This road generally stays open from the beginning of July until early in September (and so is the visitor center and facilities). From the beginning of September, however, the road is closed every night at the junction with the White River Campground, until each morning (weather permitting). The whole road is closed, however, from the junction with Sunrise and SR 410 and White River from 14 October, or the first heavy snow fall, whichever arrives first, for the winter months.

Sure is nice in the summer time.

So there you have it, lots of directions and instructions on how you can find your way to the wonderful, the inimitable Mount Rainier National Park. What are you waiting for?